The Dodecanese,
Isles of Eternal Summer

The Dodecanese island group is located in the southeastern Aegean. Every year these islands welcome large numbers of tourists attracted by their pleasant climate, beaches, and fascinating history. The footprints of the Byzantines, medieval knights, pirates, Ottomans, and Italians intersect here. These disparate influences are reflected in Dodecanese cuisine which stands out for its home-made pasta, fish, and seafood dishes that include such unusual delicacies as sea urchins and octopus roe. Local cheeses and sweets made with phyllo, honey, nuts, and spices are also part of the local culinary tradition.

Although the name Dodecanese suggests a group of twelve islands, this is the number of the larger isles which are flanked by more than 100 smaller ones, only 26 of which are inhabited. Most of them are near the Turkish coast; Kastellorizo is just 1.25 nautical miles off the Turkish shore. Yet the Eastern influence isn’t stronger here than in other parts of the Aegean. Indeed, the islands have an Italian air as they were under the control of the Knights of St John from the 13th century through the mid-16th century, and belonged to Italy from 1912 until 1947, when they were joined with Greece.
Visitors will find their own favorites in this island group too. Rhodes, the largest of the Dodecanese islands, combines legend with history. Kos, the birthplace of Hippocrates, is a popular destination for group tourism.
Kalymnos and Symi are famous for their sponge divers, while volcanic Nisyros has an active crater that bubbles and emits clouds of sulfur, breathing life into myths which identified this odor with the Titans’ breath. 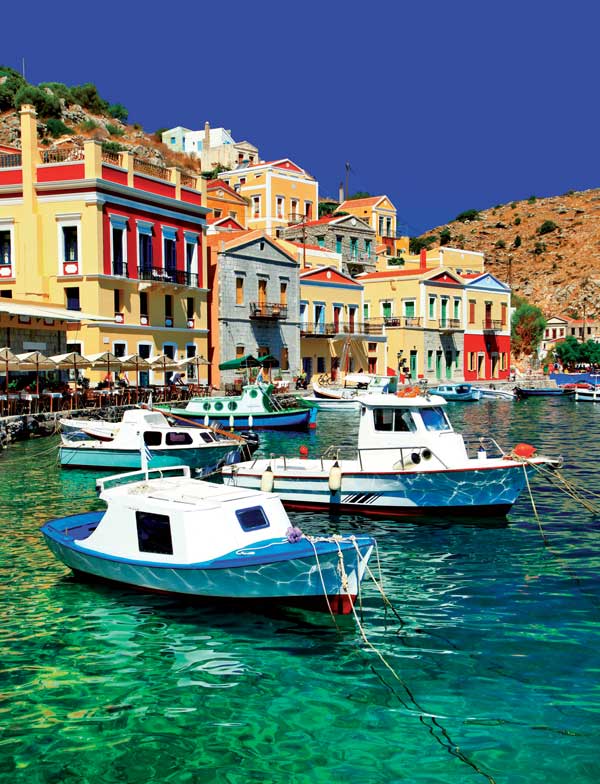 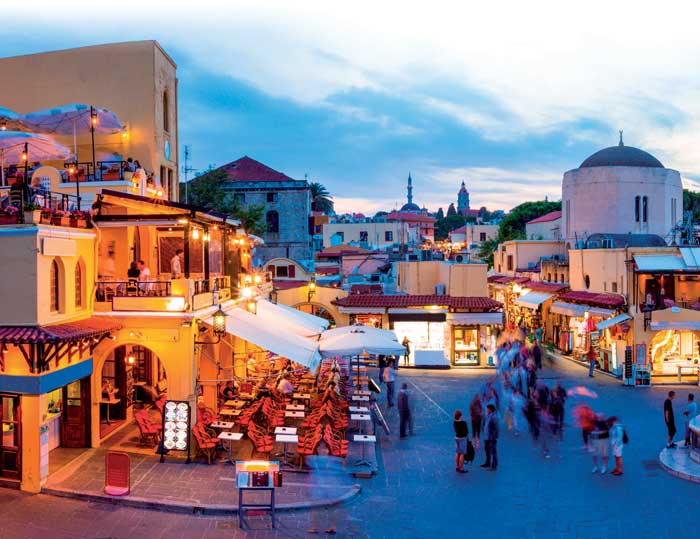 Rhodes, the island of the sun

It’s said that Zeus had shared out the world among the gods when he realized he had forgotten Helios, the sun god. Possibly irked by the thought that he might have to start over, Zeus was relieved when Helios told him he’d be satisfied with an island that had just risen from the sea off the northern coast of Asia Minor. Helios settled there and married the nymph Rhode and has since spent his time circling the island, much to visitors’ delight. Covering an area of roughly 1,400 square kilometers, Rhodes is the largest of the Dodecanese islands. It boasts Europe’s largest walled medieval city with winding lanes, old churches and mosques, quiet squares, and Jewish quarters that are like a trip back in time. Although it changed hands several times having been controlled by the Byzantines, Latins, Ottomans, and pirates, the rulers with the strongest influence on the island were the Knights of St John. They governed it from 1309 to 1522 and built the walled city with which the island is identified.

A meeting of civilizations

The combination of continuous sunshine and fertile soil resulted in a rich gastronomic tradition that also reflects
the islands’ close relationship to the earth, the sea, their proximity to the East, and the years of Italian rule. Agriculture was already developed in antiquity when the island produced fine wines. Thanks to revenues from the Colossus, one of the seven wonders of the ancient world, the islanders were able to build a formidable fleet that established Rhodes as a maritime power. Today, Rhodian wines are ranked among Greece’s finest. The main winemaking areas are in the mountainous west, which produces fruity dry whites from Athiri grapes and dark reds with intense bouquets from the Mandilaria variety. 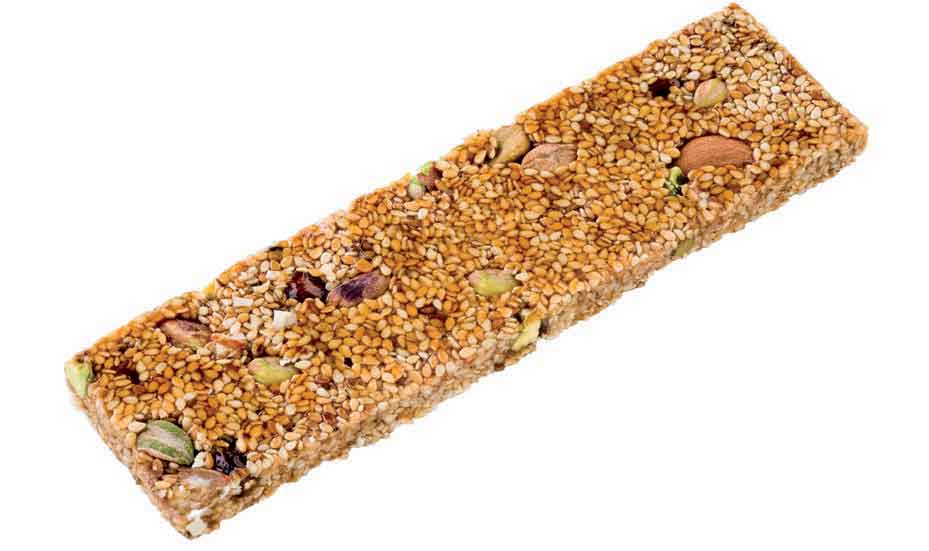 Grains are prominent in the kitchen, with home-made pasta featured in many dishes: loukoumi (short square noodles with garlic), loukoum pilaf (pasta simmered in the oven with meat), fakoryzo (lentils with rice), and soupioryzo (risotto cooked in cuttlefish ink). Favorite meze include pitaroudia, bite-sized croquettes made with chickpeas. Sesame seeds and tahini are also more prominent here than on other islands, perhaps owing to the eastern influence. Tahini is added to breads, soups, sauces, sweet or savory tarts, while sesame seeds are the main ingredient of sesame bars made with honey, almonds, and orange rind. Pastelli is popular throughout Greece but this version differs thanks to the addition of cinnamon and cumin. There are also two unique liqueurs: sette herbe, or seven herbs, made by the Franciscan monks of the Filerimos monastery, and coriandolino, the popular souvenir marked by the inclusion of a sugar-coated coriander sprig in the bottle.

The inhabitants of the tiny, rocky island of Symi are known colloquially as sardelotzoumia, or sardine juices, because of their fondness for fish and unusual seafood dishes. A land of mariners, fishermen, and sponge-divers like neighboring Kalymnos, Symi has a long culinary tradition in salted fish. Sponge divers customarily left after Easter and returned in the fall, prompting locals to perfect the art of preserving fish and seafood so the sponge divers would be able to take sufficient provisions with them for their months at sea. Fish was sliced or chopped and placed in bottles of seawater, then removed and eaten with a drizzle of olive oil or lemon juice. Today, Symi’s cuisine features a number of dishes using brine, dried, or canned fish: salted and sun-dried whitebait or parrotfish; sun-dried lobster or crayfish tails, usually served during Lent; dried octopus sprinkled with pepper. Octopus roe is used to make a type of bottarga served as a meze; the roe is left outside to dry and then eaten or sometimes grilled. You’ll also find canned local delicacies like spinialo, made with sea urchins, fan mussels, and sea figs—rock-clinging marine invertebrates (also known on Symi as ‘sea potatoes) that cling to rocks and feed off microorganisms, thus filtering the water. 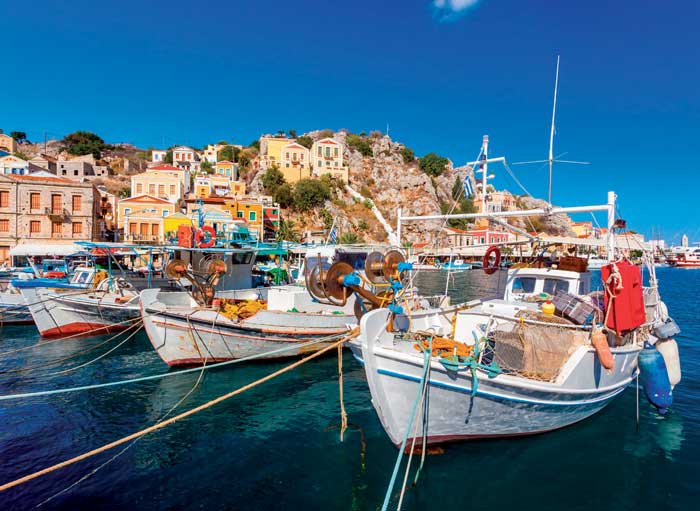 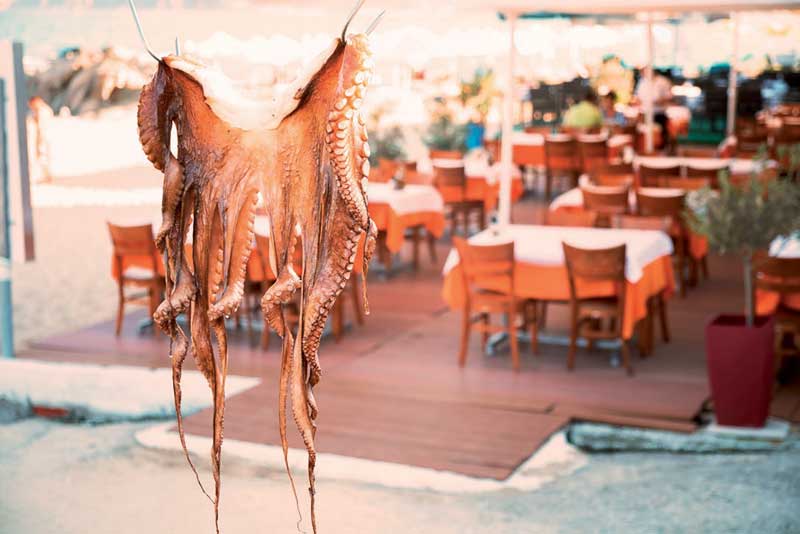 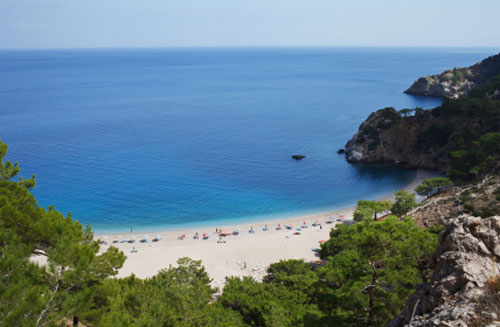 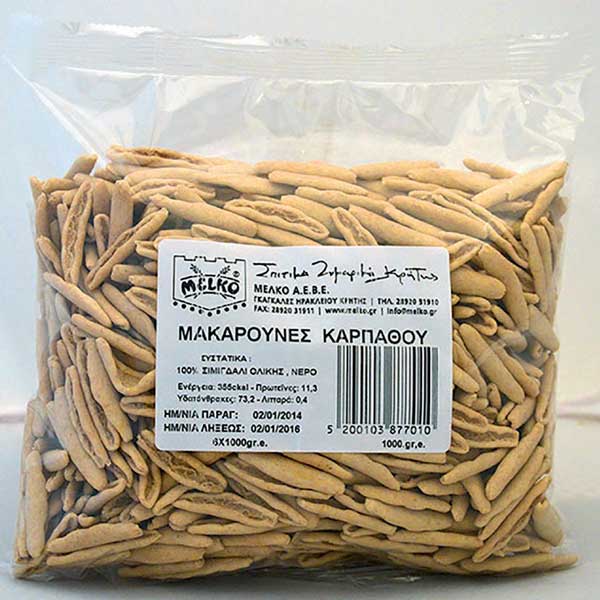 The range for gourmands in the Dodecanese is broad indeed. On Karpathos, the second largest of these islands, visitors can taste makarounes, homemade pasta shaped liked oblong shells and usually cooked with garlic, onions, olive oil, and myzithra cheese. Kassos—an island with a tradition of close contacts with Crete, Egypt, and Asia Minor—brings to the table dishes like stuffed lamb for Easter, boustia (lamb intestines stuffed with ground meat, liver, and rice), and a cinnamon-flavored pilaf. Kalymnos produces citrus, wine, and honey. The island’s culinary traditions include bread with ouzo and anise and barley rusks that sailors took with them on sea journeys as they did not grow moldy. Calamari and octopus are plentiful too, the latter simmered in ouzo or grilled or stewed with makarounes. Sea figs are also a local delicacy, along with a variety of fish or seafood dishes. As on Karpathos, the traditional Easter dish is stuffed lamb; called mououri, it is simmered for roughly a day in a clay pot placed in an oven with a clay door. This method of cooking meat conceals smoke and odors, and apparently dates back to Ottoman rule when islanders took pains not to attract the ubiquitous pirates. 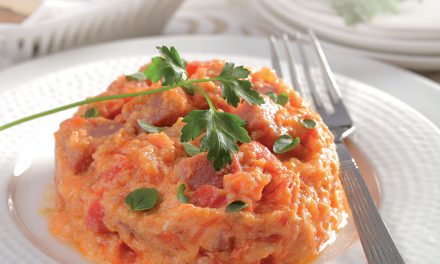 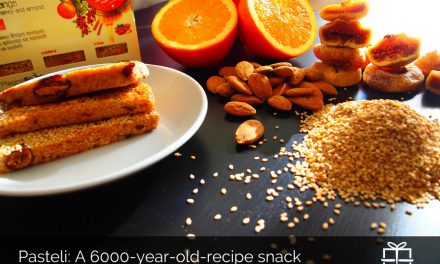