Ouzo is described as being as transparent, sweet, and intoxicating as the Greeks. This may be why it’s their favorite spirit. It’s sipped as an aperitif but also as a digestif. Its distinctive anise flavor and bouquet of fennel, cardamom, and other herbs accompanies all feasts and celebrations and extends a hospitable welcome to the traveler. 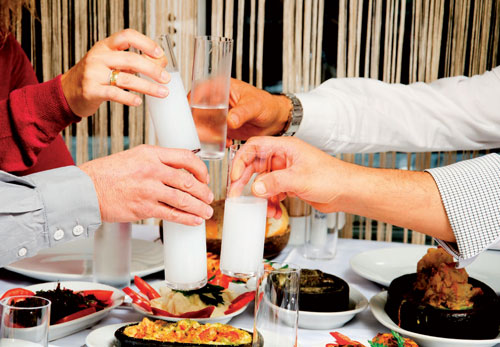 Ouzo is made according to a traditional method and recipe kept secret by distillers, and enjoys PDO status. Some claim that ouzo was born in 1880 in Thessaly, specifically in the town of Tyrnavos, famed at the time for its strong drinks and silk. Locals decided to improve their raki with a third distillation to make it milder, while also adding Chios mastiha and other aromatic herbs. The result was such a success that it was named “Per Uso Massalia”, that is, for use in Marseille, a colloquialism used to describe top-quality products destined for export. As is often the case with great inventions, there are several versions of this story. By another account, ouzo is nothing but tsipouro with the addition of anise. Both tipples were created in the 14th century by Orthodox monks at Mount Athos who sought to utilize the seeds, stems, and grape remainders from the wine press. Either way, ouzo began being produced regularly in the early 19th century after Greek independence, with much of the production centered on the island of Lesvos—which continues to be the heart of ouzo-making. Ouzo’s popularity soared in the early 20th century after absinthe 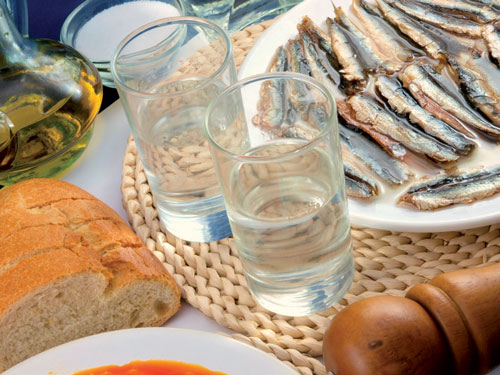 was banned, thanks to its similar taste; indeed, at one point it was called “absinthe without absinthe.” Ouzo is traditionally made from grapes, anise, alcohol, and sugar. Fennel seeds and other herbs like coriander, cardamom, cinnamon, or cloves may also be added. Almost every producer has his own formula, with closely-guarded ingredients, which is why there are so many different varieties of ouzo.
Ouzo, with its strong sweet taste and distinctive licorice scent, is imbibed throughout Greece. It’s served before a meal as an aperitif and afterwards as a digestif, and is frequently used in toasts at weddings, birthdays, and baptisms. Visitors are offered ouzo as a gesture of hospitality.
But it’s also consumed for no particular reason other than to pass the time or sweeten the day. It’s an ideal accompaniment for cold dishes like salads, octopus, and sardines, and is also used with fish and shellfish, mainly in marinades. 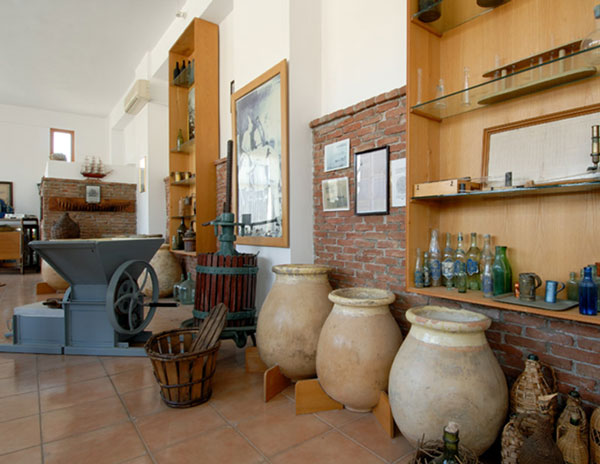 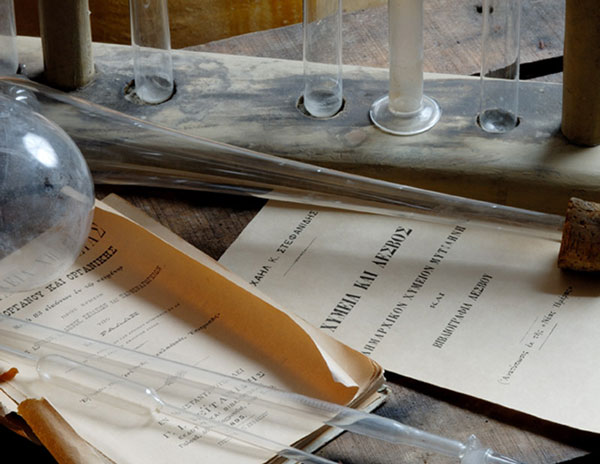 The Ouzo Museum is located on the island of Lesvos, the heart of ouzo production. Travelers who wish to discover this favorite Greek tipple’s secrets need only to make a visit. The museum is adjacent to the Barbayannis’s modern distillery. The Barbayannis name is renowned throughout Greece as the family has been producing ouzo for over 150 years. The business was launched by Efstathios Barbayannis who arrived at Plomari in 1860 from Odessa, where he had learned the technique of distillation. Settling on the island, he put this knowledge to use, utilizing Lesvos’s abundant water and wild herbs, including anise, to make a high quality spirit that was eventually sold in Greek and Mediterranean port cities like Alexandria and Beirut. Museum exhibits include the tools used for bottling and labeling the famed Barbayannis Blue, whose recipe has not changed for a century and a half. Also on display is an 1858 still made in Constantinople which Efstathios used to refine the family recipes. Guides explain the strict specifications for making ouzo and how to tell a genuine product from an imitation: to be called ouzo, a spirit must be made in either Greece or Cyprus with anise seeds, Chios mastiha, and more recently fennel seeds; it must also be distilled in traditional copper stills and have an alcohol content between 55 and 88 degrees. Many Greeks drink ouzo straight, without water or ice, but with a glass of water served on the side. Novices and tourists usually mix ouzo with water, roughly in a 1:2 ration; the addition of water gives ouzo its milky color and cuts its alcohol content. 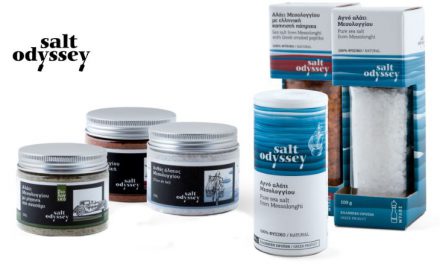