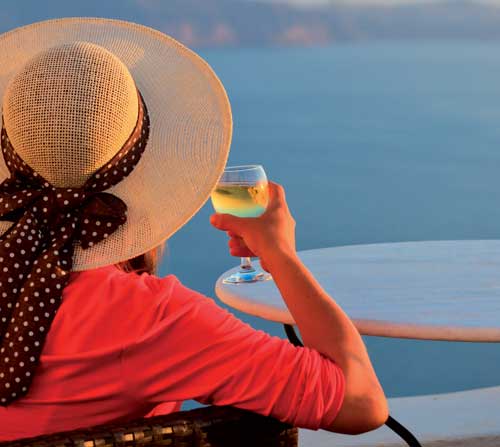 Despite being the land of the wine-god Dionysus and legendary Greek wines in antiquity, Greece did not develop a reputation as a wine-producing country until recently. Nevertheless, since joining the EU, new generations of professionals and investments in technology and marketing have propelled the country back into the limelight of international viniculture and given us the opportunity to discover special new wines from unique grape varieties. These include Santorini’s Assyrtiko, a crisp, flinty white, Kefalonia’s Robola, the so called stone wine, and Naoussa’s reds, which were considered the finest in the Ottoman Empire.

References claim Virgil often said that it was easier to count the grains of sand in Greece than the varieties of grape. Greece boasted some 300 native varieties, some of which have almost disappeared. This incredible armory, this kaleidoscope of flavors and aromas as well as the excellent quality-to price ratio are the strong points of Greek wines.
Today we can find dry whites with high acidity and salty or lemony notes, robust reds, sweet muscats, and even sparkling wines. Geography—mountain or sea, limestone or volcanic soil—and Greece’s warm, Mediterranean climate have offered the best conditions for viticulture ever since ancient times. Historians have found evidence of wine as early as 4000 B.C., noting that it quickly became a basic element of Greek life and culture. The ancient Greeks elevated wine to the sphere of the gods. Dionysus was the god of vegetation and inspiration, and sacrifices, festivals, and dances held in his honor laid the foundations for the birth of the theater.
The ancient Greeks and Romans praised the benefits of this drink (always in moderation): Alkaios reminds us that “in wine there is truth,” while Horace, in his Epistles, notes “O drink is mighty! secrets it unlocks, Turns hope to fact, sets cowards on to box, Takes burdens from the careworn, finds out parts, in stupid folks, and teaches unknown arts.” Under Ottoman rule, vines and olives were considered ordinary local farm products, while later, the world wars and the ensuing civil war, economic crisis, and phylloxera, led Greece to turn its back on wine.
Luckily, a few decades ago, the technical expertise and passion of young agronomists and oenologists who studied at the finest schools abroad spurred them to revive old vineyards or plant new ones and resuscitate the sector, placing Greece once more at the forefront of international winemaking. 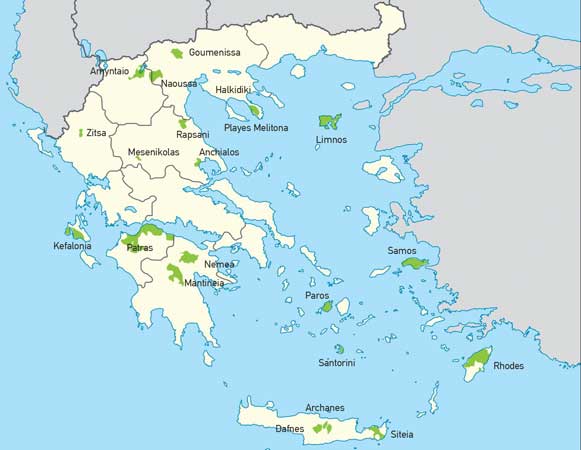 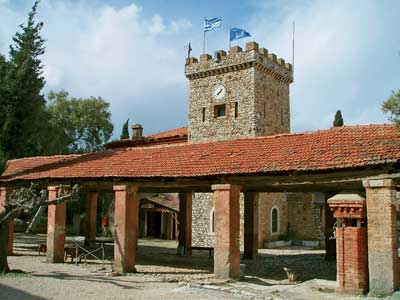 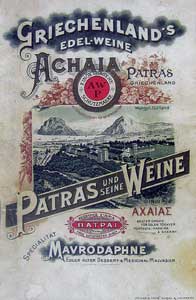 The Nemea region, in the northern Peloponnese, has been dubbed “little Burgundy.” This is the home of one of Greece’s best-known grapes, the Ayiorgitiko. It is linked to the legend of Heracles and the Nemean lion as its deep red color is attributed to the blood of the slain animal. Today it is intensely cultivated here and has attained PDO status. The full bodied wine has fruity notes and is dry, with a deep ruby color and a bouquet of red currant, cherry, and mulberry. The fruity Moschofilero—another native grape treasure of Greek tradition—is grown in Mantineia, a plateau near Tripoli. This variety ripens slowly—harvest is usually in early November—and produces white wines with a low alcohol content, flowery bouquet, and intensely fruity flavor. About one-fourth of Greek wines are produced in the Peloponnese. 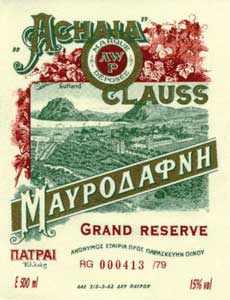 Most of them are concentrated in Achaia, where some 6,700 hectares of vineyards produce dry white wines like Roditis (a fine muscat) and the sweet Mavrodaphne. Mavrodaphne is the bestseller of the Achaia Clauss winery which is located eight kilometers from Patras. It was founded in the mid-19th century by Gustav Clauss, a German from Bavaria who was so charmed by the landscape and the wine that he decided to settle here. Housed in an old castle, the winery is Greece’s biggest and a tourist attraction in itself. Visitors can sample some of the label’s best-known wines and discover the collection of antique barrels dedicated to famous visitors like Empress Elisabeth of Austria, composer Franz Liszt, astronaut Neil Armstrong, and actor Omar Sharif. 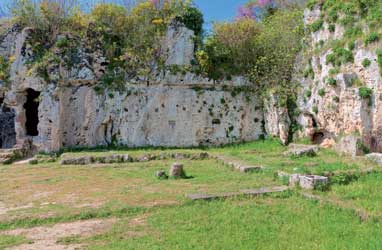 Naoussa, the old capital of the Macedonian kings and seat of Aristotle’s open-air school, lent its name to the first Greek wine to win PDO designation in 1971. The Naoussa vineyards, which cover 650 hectares, are located on the slopes of Mount Vermio which, according to myth, was the home of Dionysus’s mother Semele and stomping ground of Silenus, the wine god’s oldest and wisest follower. The climate with its rainy winters and dry, hot summers is ideal for the Xinomavro grape, which produces a deep red wine with high acidity and an aroma of red fruits.

Xinomavro is rich in tannins and has a high alcohol content; once aged in oak barrels it acquires notes of spices and tomatoes. Naoussa wines were considered the Ottoman Empire’s finest and served at top restaurants in Vienna, Russia, and Constantinople. But a phylloxera infestation in the 1930s led to the vineyards’ abandonment.

The region’s reputation was restored in the late 1960s, when young winemakers returned with new ideas, including organic cultivation, and replanted the vineyards with hardier varieties. One of those responsible for this renaissance is the Boutari label. Founded in 1879, Boutari is one of Greece’s leading winemakers with six wineries in Greece. The winemaker has won several prizes in international competitions and exports its wines to more than 45 countries. Grand Reserve Naoussa, which is barrel-aged for at least two years and bottle-aged for two more, is one of its top wines. Other prominent winemakers in the area include Apostolos Thymiotopoulos, a champion of organic wines, who believes that minimal human interference in the vineyards produces wines with the greatest clarity. The Dalamaras produce fresh wines from ungrafted 100-year-old vines. Continuing our wine tour of Macedonia, we encounter several other important wine producing areas like Goumenissa, Amyntaio, and Halkidiki, where aside from Xinomavro, varieties such as Negoska, Roditis, Limnio, Cabernet Sauvignon, and Merlot are cultivated. 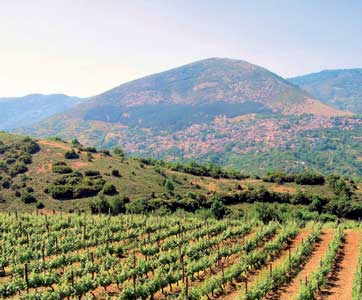 About one-third of Greek wines are produced in Epirus and Thessaly. The region has three wines with PDO designation: Rapsani, at the foothills of Mount Olympus, produces red wines; Zitsa, northwest of Ioannina, produces a sparkling dry or semidry white; and, Anchialos, near Volos, produces white

wines from Roditis and Savvatiano grapes. Savvatiano grapes are also used for making retsina, the most widely known of all Greek wines. Resinated wine has been produced throughout the Greek world for three thousand years.

Amphorae used for transporting wine were sealed with pine resin to prevent it from becoming oxygenated. Resin imparted a distinctive aroma and even after barrels eliminated the need for resin seals, Greeks continued to add resin as they had become accustomed to the taste. Retsina is produced throughout Greece, although chiefly in Attica and Evia. It’s a light, refreshing wine with an intense taste of pine resin that does not appeal to everyone. In recent years, some wineries are producing a more refined version, like the Dakry Tou Pefkou (the pine’s tear) of Thessaloniki’s Kechri Winery with its delicate fresh taste and buttery, vanilla notes.

Santorini’s Assyrtiko is considered by some to be Greece’s finest white wine. As the British journalist and wine critic Andrew Jefford notes, you can taste the earth’s rage in it. This wine, distinctive and aristocratic, reflects the landscape’s unique characteristics: sun, wind, dry climate, soil of lava, pumice, shale, and limestone where most vines would struggle to grow. This climatic stress delays the grapes’ ripening and increases their sugar content, which gives the wine its unique character. High winds have forced growers to adopt the ancient growing method of a “wreath” shape: vines are entwined to form a basket or nest that shelters the grapes and helps retain moisture. Three types of Assyrtiko are produced: dry, barrel-aged; dry, aged in a steel tank; and Vin Santo, a very sweet and aromatic aged wine made with sundried grapes. 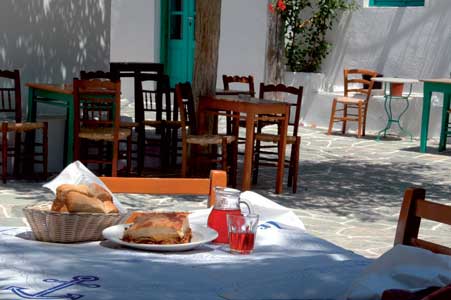 Other islands also have successful winemaking traditions. Paros produces a dry white from Mandilaria and Monemvasia grapes. Limnos is known for its Limnio or Kalabaki, a red wine with herbal notes, as well as its Alexandria Muscat that is similar to the white Muscat of Samos. Rhodes produces dry whites and a sparkling wine. In the Ionian, Kefalonia is famous for both dry and sweet Robola, whose origins are lost in the mists of time. The vines are cultivated at an altitude of 800 meters and the dry, infertile soil imparts such a distinctive taste that the Italians had dubbed this vino di sasso, or stone wine. 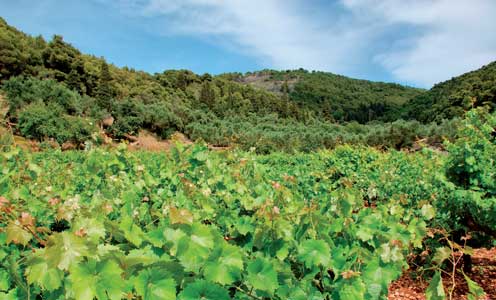 The Gentilini Winery and Vineyards are a mandatory stop for visitors to Kefalonia. Of Venetian descent, the family represents a new generation of winemakers who use unique local grape varieties. Their wines capture the island’s distinctive characteristics and cultivation is 100 per cent organic. A tour of Greek viniculture would be incomplete without a visit to Crete. This island accounts for about 20 per cent of Greek wine production and its wines reflect the landscape’s diversity. The technical expertise of individual winemakers is combined with the initiative of small but organized wine cooperatives that have managed to revive the phylloxera-blighted vineyards in just four decades.

Archanes and Peza have both earned PDO status for their Kotsifali and Mandilaria wines. Kotsifali grapes produce a robust, fruity wine, while Mandilaria grapes give earthy ruby-colored wines. The Peza plain and the Siteia area are both known for their Vilana grapes, a local white variety which results in a refreshing fruity wine with strong lemony notes. According to historians, wine was introduced to Greece through Crete and its trade with the Egyptians. The Minoans learned the art of viticulture. Palaces like Knossos had vineyards, while the world’s oldest wine press which dates from 3500 B.C. was discovered by archaeologists at Archanes. Wine brought civilization. As Thucydides notes, “The peoples of the Mediterranean began to emerge from barbarism when they learned to cultivate the olive and the vine.”

Get your first subscription box now 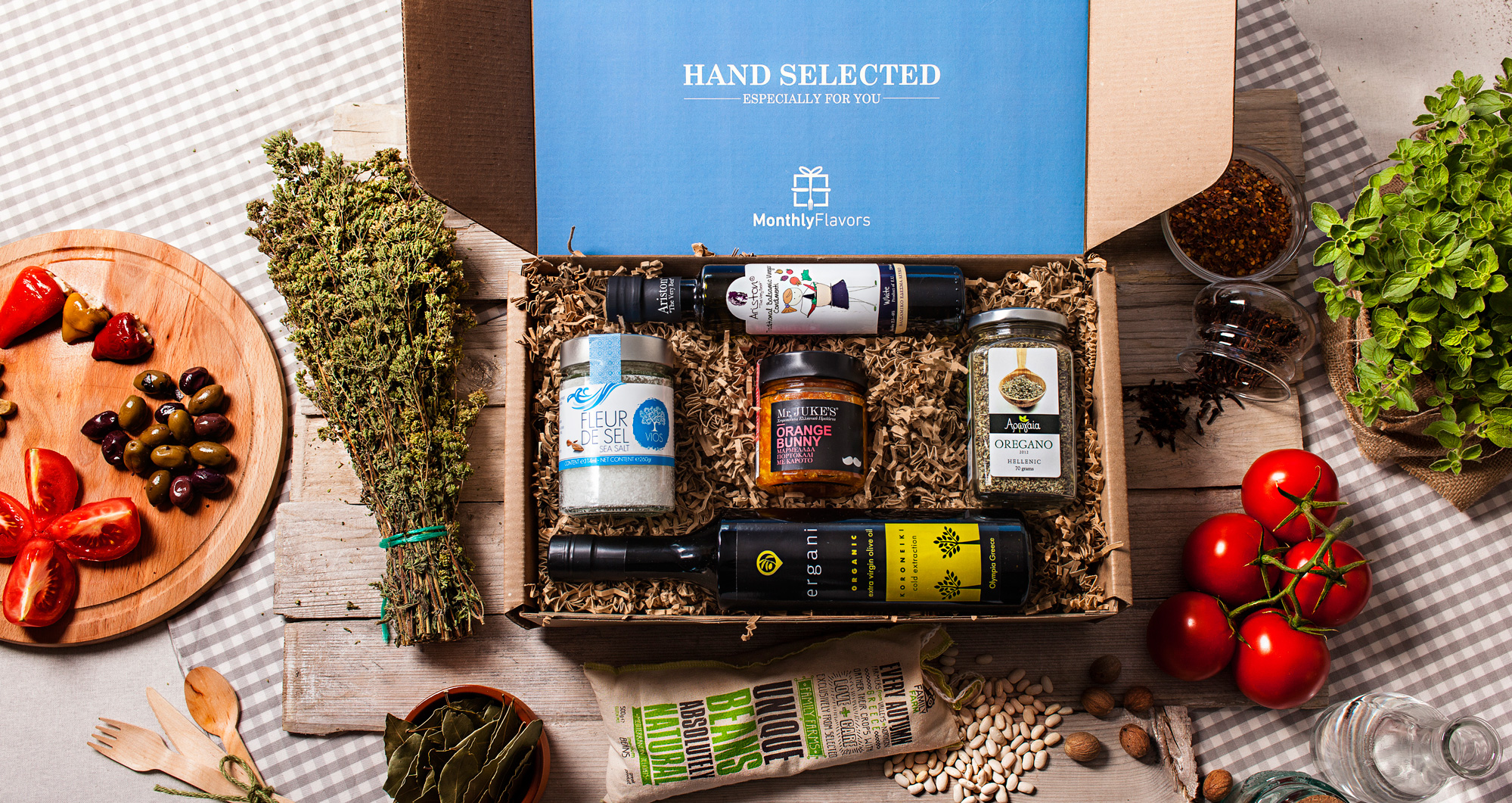 Get your box now

In form of a monthly subscription box for gourmets, we send you a unique selection of high quality Greek and Mediterranean delicacies. Each package contains 5-6 carefully selected food products from small producers. These include products created by traditional family farms, by farmers specialized in organic farming, as well as new innovative producers specialized in combining the different flavors of the Mediterranean into novel food products.

Order your first delicious food box today and enjoy Greece and the Mediterrean every month. We send it directly to your doorstep by mail. 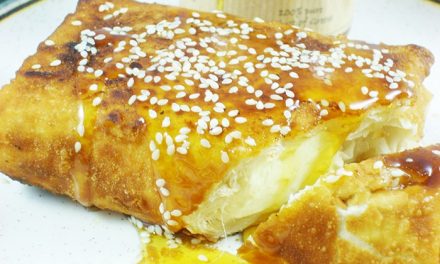 Greek Feta Pie That Will Blow Your Mind 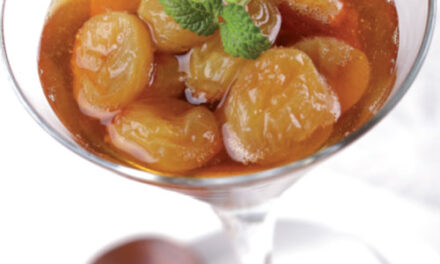