Cheese,
the Gift of the Gods

Greece is the biggest consumer of cheese in the world, surpassing even France. One reason is the delectable taste of Greek cheeses, products of a tradition stretching back to Homer, and the diversity of the vegetation in the grazing areas which guarantees high quality milk. Feta is indisputably the star of the Greek cheeses, but their variety is great: there are hard, semi-hard, soft, fresh, mature, and salty cheeses. 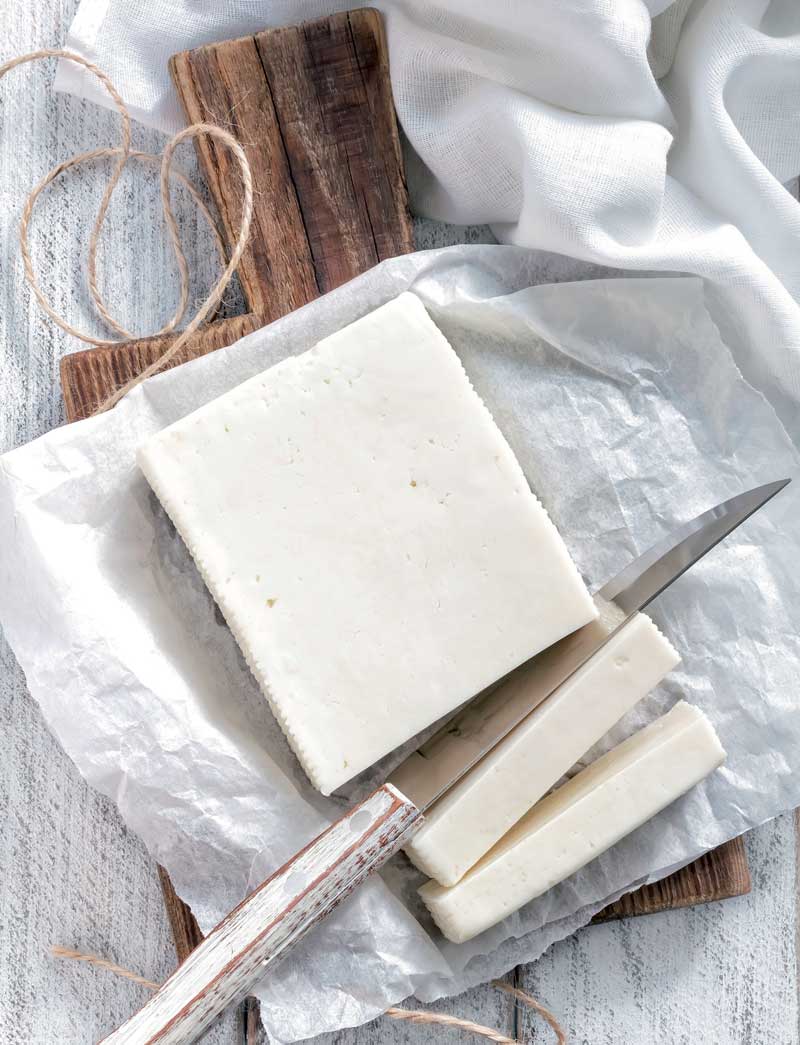 Cheese is believed to be one of the Olympian gods’ gifts to mortals. The nymphs taught cheesemaking to Aristaeus, son of Apollo and the huntress-nymph Cyrene, and he, in turn, revealed these techniques to mortals. But in reality, cheese predates Greek civilization and may have its roots in the Middle East. The oldest known testimony is a depiction of dairy production on a Sumerian frieze dated between 2600 and 2350 B.C. Greece took this heritage, perfected it, and spread it to other peoples. Later, in Italy, where cheese was vitally important to Roman agriculture, the Roman legions spread cheesemaking through Europe.

Greece, unlike other countries, doesn’t serve cheese as a side dish or accompaniment but as a basic dish that can be served at all meals and eaten with everything. Cheese is consumed as meze with a glass of wine and is integral to dishes like salads, pasta, sauces, sweets, and desserts. Greeks show a preference for cheese made from sheep’s or goat’s milk, which have a long tradition in Greek cuisine and were a key part of Greeks’ diet in times of poverty.

Ask any foreigner to name a Greek cheese and it’s most likely they will mention feta, Greece’s best-known cheese. Feta alone accounts for 40 per cent of Greeks’ cheese consumption, an average per capita of 12 kilos per year. It’s a cheese with a long history. Its “ancestor” is believed to be the cheese that Odysseus and his crew stole from the cave of the Cyclops Polyphemus. Nomadic shepherds have been making feta for several centuries as a way of preserving or storing milk. The main feta production area today is in mountainous regions with a stockbreeding tradition in Macedonia, Thrace, Thessaly, Central Greece, Epirus, the Peloponnese, and the island of Lesvos. 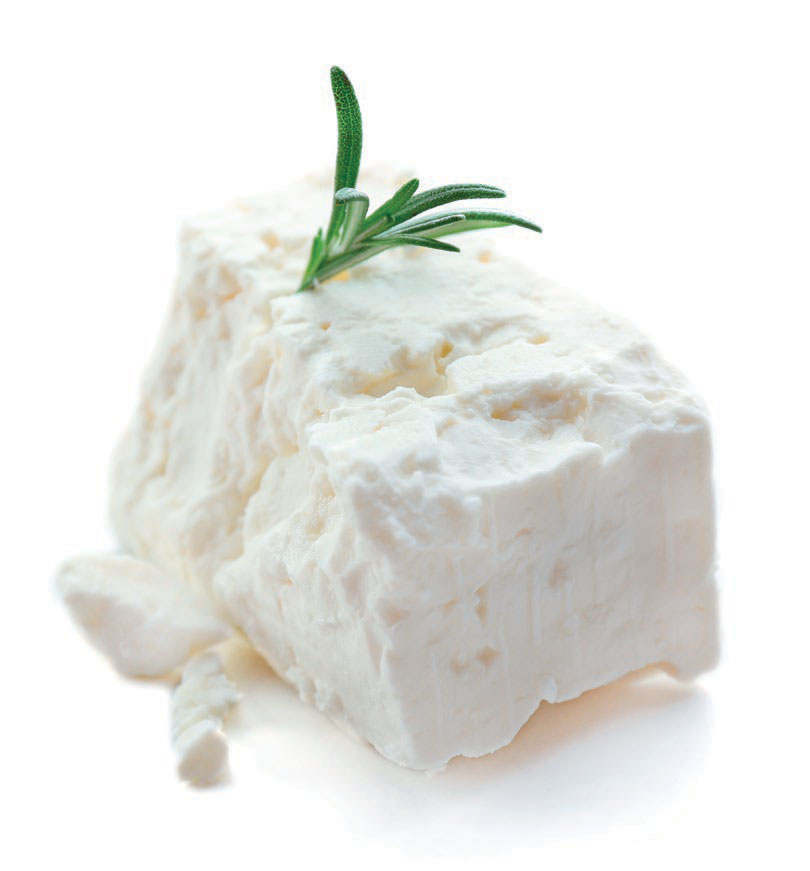 Feta is made with unpasteurized sheep’s and goat’s milk. It is white, crumbly, with a creamy texture, and a sharp, slightly salty flavor imparted by brine. Traditionally it was matured in wooden barrels although today most producers use steel tanks instead. Feta is sold in blocks or thick slabs and kept in the brine from its whey or in a plastic container with a similar liquid. It is named after these thick slabs or slices, fetes.

Feta is used liberally in the Greek kitchen. It’s added to salads made with tomatoes, cucumbers, onions, and oregano, adding a distinctive flavor along with protein and calcium. It is ideal for gratins and is the most common savory pie filling, in the popular tyropita, or the equally popular spinach pie, spanakopita. Feta is used in sweets or “wed” to red peppers in a thick dip called htypiti. Its sharp, salty flavor pairs perfectly with the sweetness and anise in ouzo. 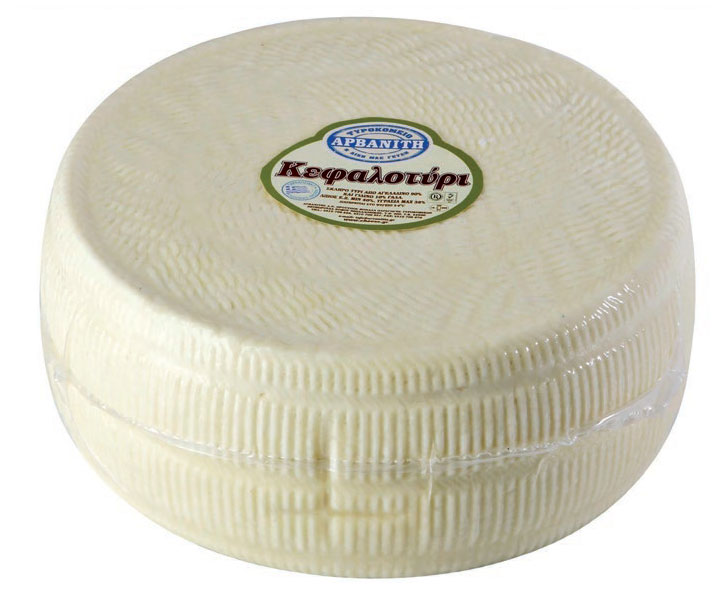 The patriarch of the hard Greek cheeses, kefalotyri owes its name to its broad and relatively high cylindrical shape resembling a head (kefali). It is produced in Macedonia, the Peloponnese, Thessaly, Epirus, the Ionian islands, and the Cyclades, but the best-known kefalotyri comes from Crete. A hard, compact cheese with a strong flavor and scent, it’s made from goat’s and sheep’s milk, then left in brine to mature in a cool, damp cellar for two or three months. In cooking, it’s used in sauces, main dishes, and salads, or grated over pasta. It’s excellent grilled or fried (saganaki).

Macedonia, Thessaly, Xanthi, and Lesvos are the main kasseri-producing areas. The cheese—second most popular, after feta—has been made since the 19th century and is believed to have been introduced to Greece from Bulgaria, where it’s called kashkaval from the Italian caciocavallo, in Turkey, it’s called kasar. Kasseri is semi-hard, dry, and yellow. It has a mild sharpness and saltiness, with a creamy texture like Italy’s provolone. It’s suited to a range of culinary uses as it can be grated or cooked. 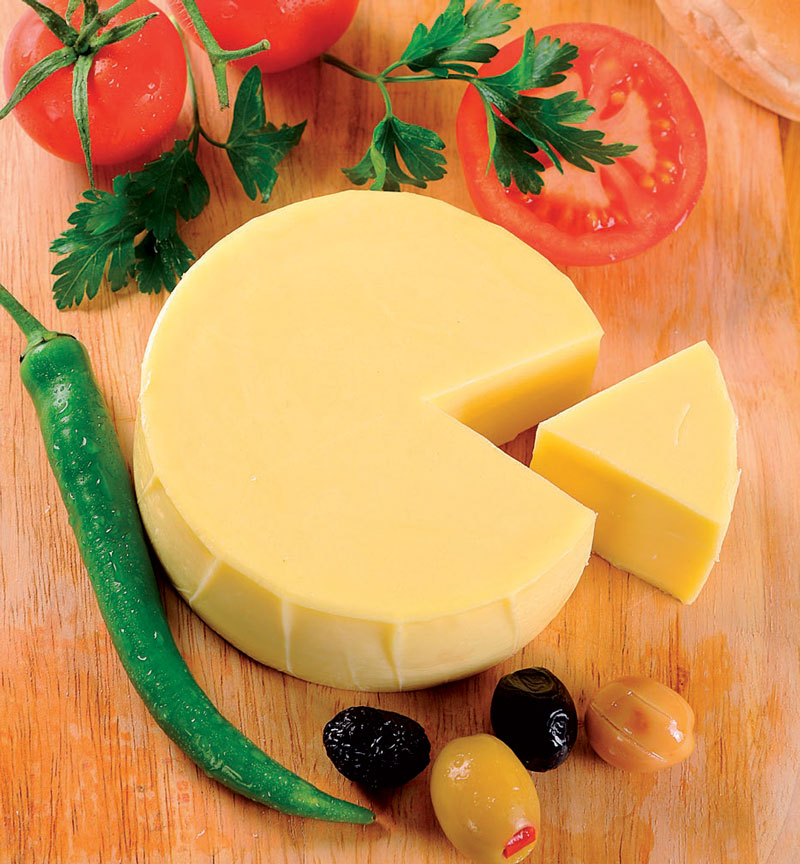 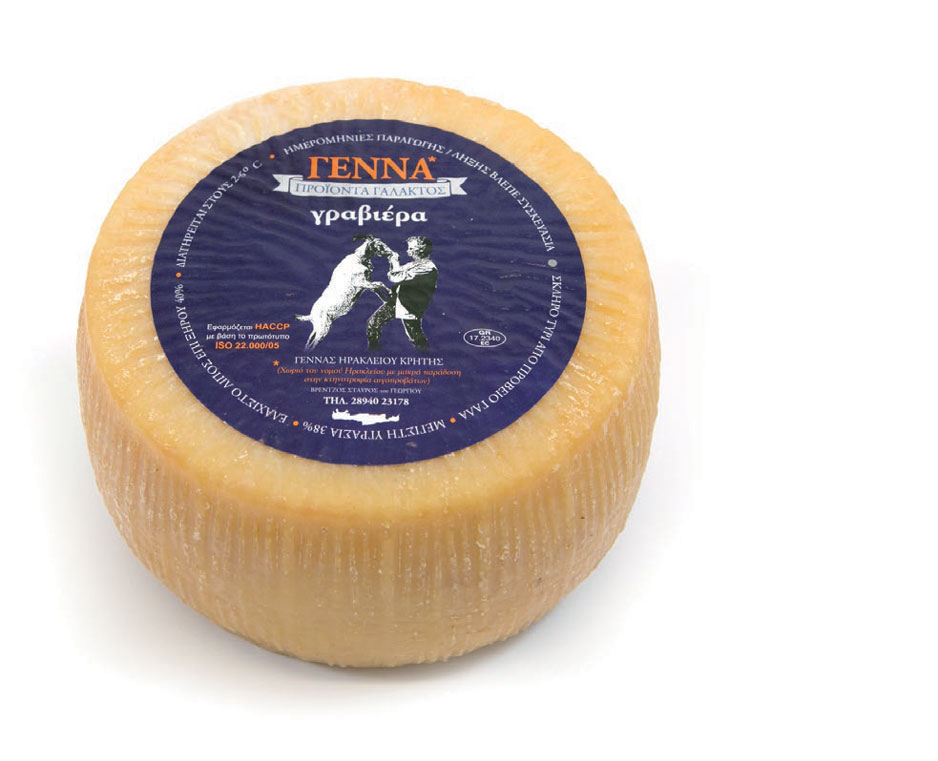 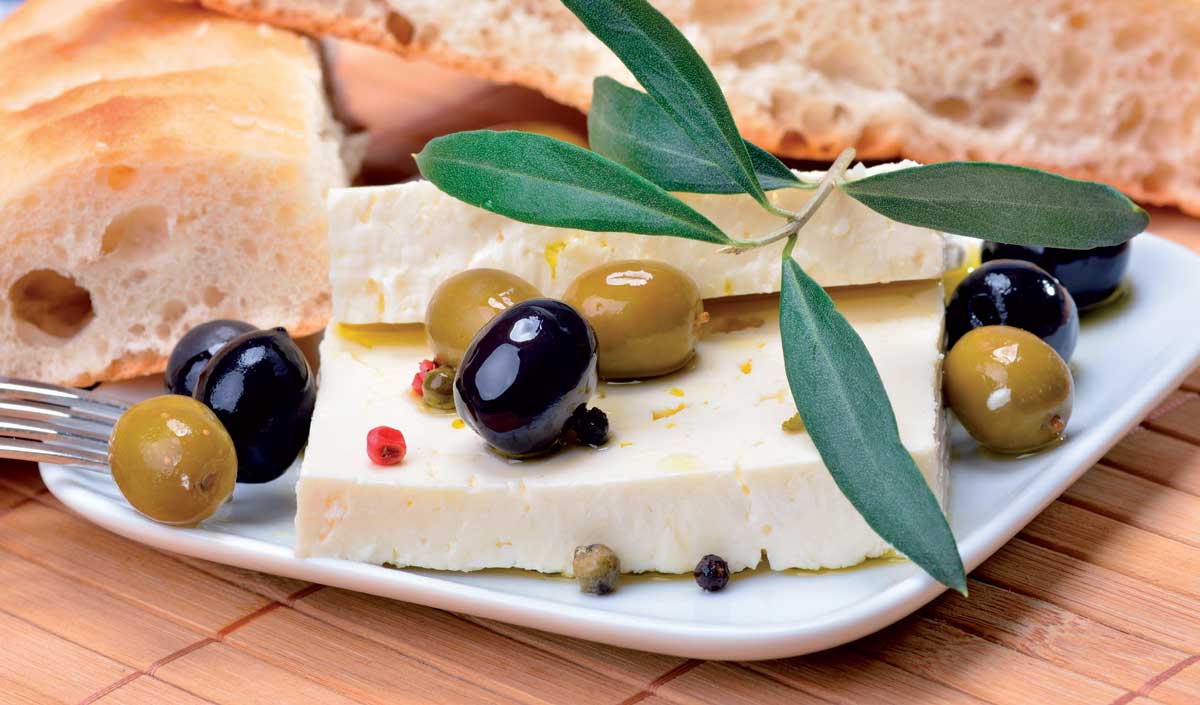 The name graviera embraces a whole family of hard and semi-hard cheeses that are ripe, creamy, rich, with a mild, fruity sweetness similar to the Swiss emmenthal and gruyère. Indeed, it’s name is a corruption of the latter. Like the Swiss cheeses, graviera is traditionally made from cow’s, sheep’s, or goat’s milk depending on the season. Today, cow’s milk is the most common, with the addition of varying proportions of sheep’s or goat’s milk depending on the region. Three types of Greek graviera have been awarded PDO designation: Naxos graviera, made with cow’s milk; Crete graviera, which is made with sheep’s milk and has a light aroma but intense flavor when baked in the oven; and, Agrafa graviera, made in the Thessaly region from sheep’s and goat’s milk.
Graviera can be served on its own, fried, baked, grated, in biscuits, and in cheese-based sweets.

The ancient Greeks knew how to use the whey from feta or kefalotyri to make the mild myzithra. Today, it’s made by adding milk or cream to warm whey and letting it set. It’s then transferred into small baskets lined with a sheer cloth to drain. Traditionally, the thickened whey mixture was poured into cheesecloth, tied, and hung outside to drain. Fresh myzithra, also known as anthotyro, is soft, with a mild, barely perceptible sweetness that tastes like milk and lends itself to pastry fillings. Hard aged myzithra is used for grating. Whey is also used to make manouri, a very thick creamy cheese with a fresh, milky, and slightly soured taste. Considerably denser than fresh myzithra, it pairs wonderfully with honey and is ideal for breakfast as it is lower in saturated fat than strained yogurt. 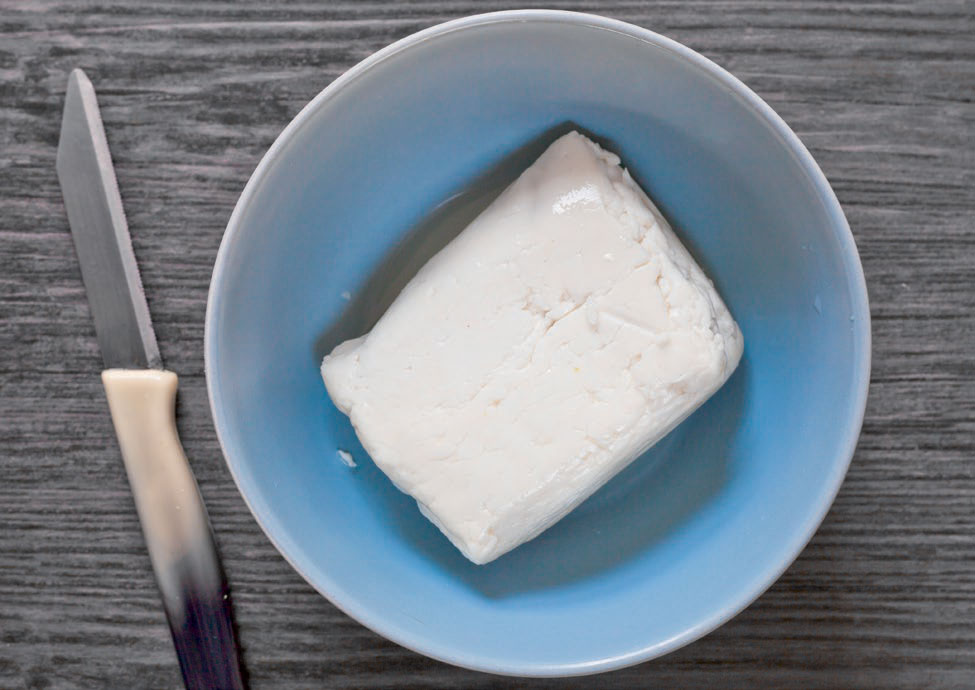 Greek cheeses aren’t limited to those mentioned above. In addition to the ubiquitous feta, every region and island produces local products so an exploration of Greek cheeses is also an exploration of Greece. There are hard and soft cheeses, sweet and salty, mild and sharp, smoked and brine-aged. About 20 cheeses have PDO status, while most are from the country’s northern and mountain areas where shepherds have made cheese for generations. 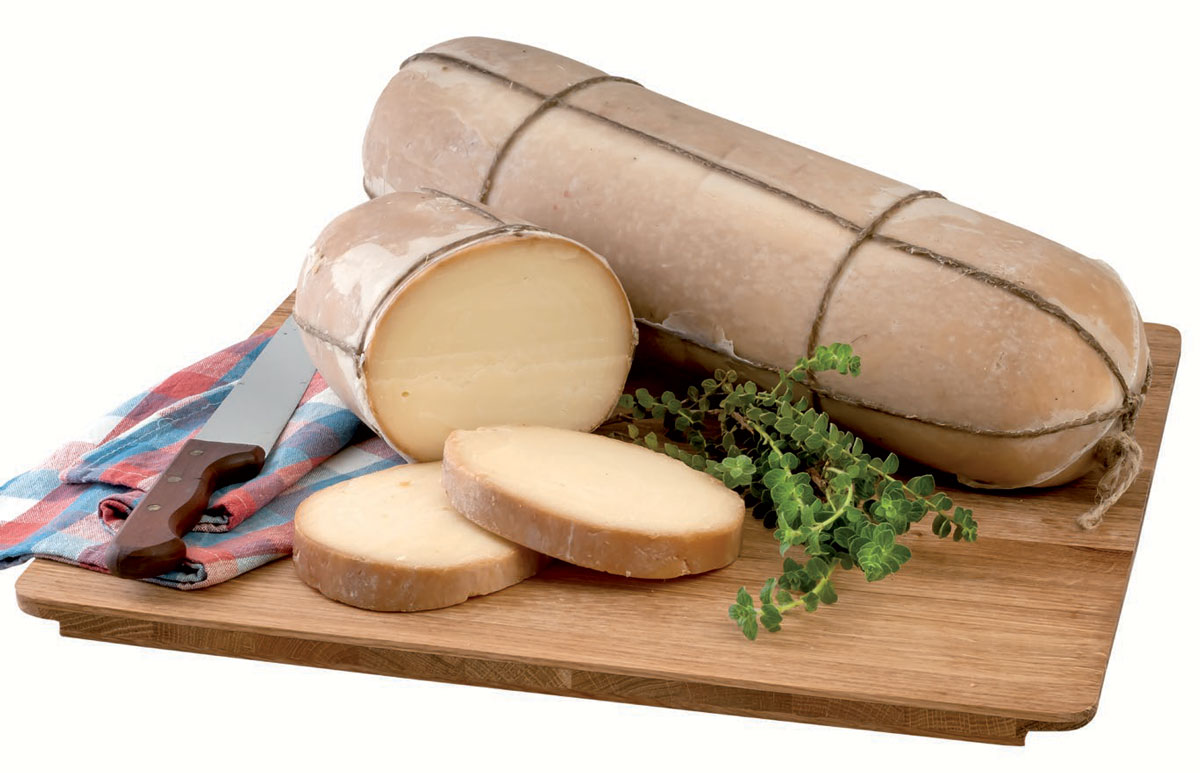 One of these cheeses is formaela, produced for over a century in Arachova and the Parnassus range, where it is matured for months in caves near the Delphi archaeological site. Greeks love savory flavors so there are a number of brine-aged domestic cheeses like sfela in the southern Peloponnese and batzos, formerly found throughout Greece but now made only in Macedonia.

One of these is Epirus’s metsovone, which is smoked with local herbs. There are also very soft cheeses that are eaten with a spoon like Macedonia’s anevato and the mild homemade galotyri of Epirus and Thessaly. The Aegean offers cheese lovers an archipelago of shapes, textures, smells, and flavors. 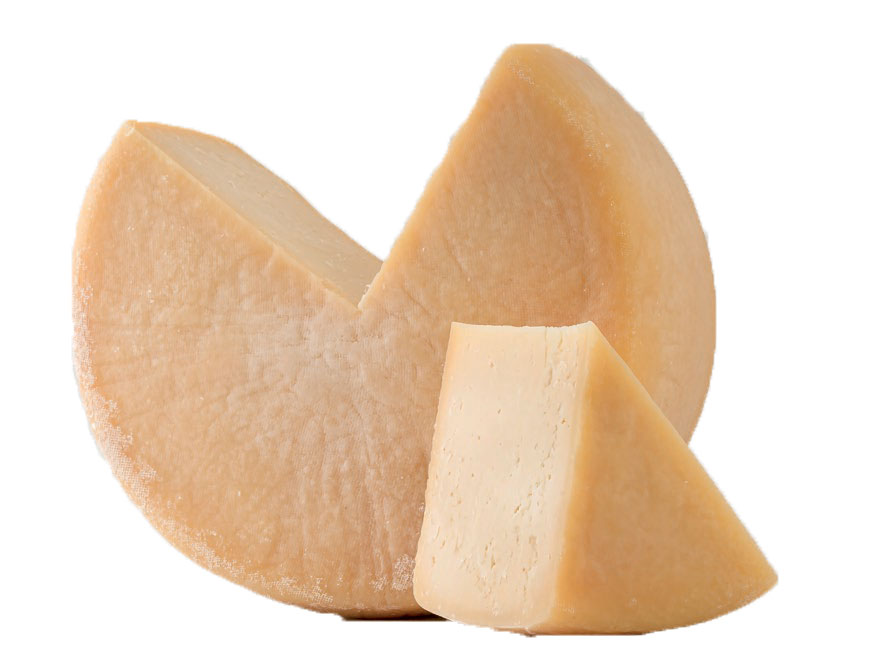 In the Cyclades, visitors can sample the Sifnos manoura, which is aged in wine sediment Syros’s San Michali, made with cow’s milk and Mykonos’s kopanisti, a soft, creamy, sharp cheese sometimes called Greece’s roquefort because it also contains molds. In the northern Aegean islands, outstanding cheeses include Limnos’s kalathaki, a sheep’s milk cheese named for the basket (kalathi) used to give it its shape. Lesvos’s ladotyri is preserved in olive oil, which imparts a sharp flavor and smell. Further south, in the Dodecanese, Kos’s krassotyro is submerged in wine while Kassos’s sitaka is a distinctive soft cheese made from either goat’s or sheep’s milk. 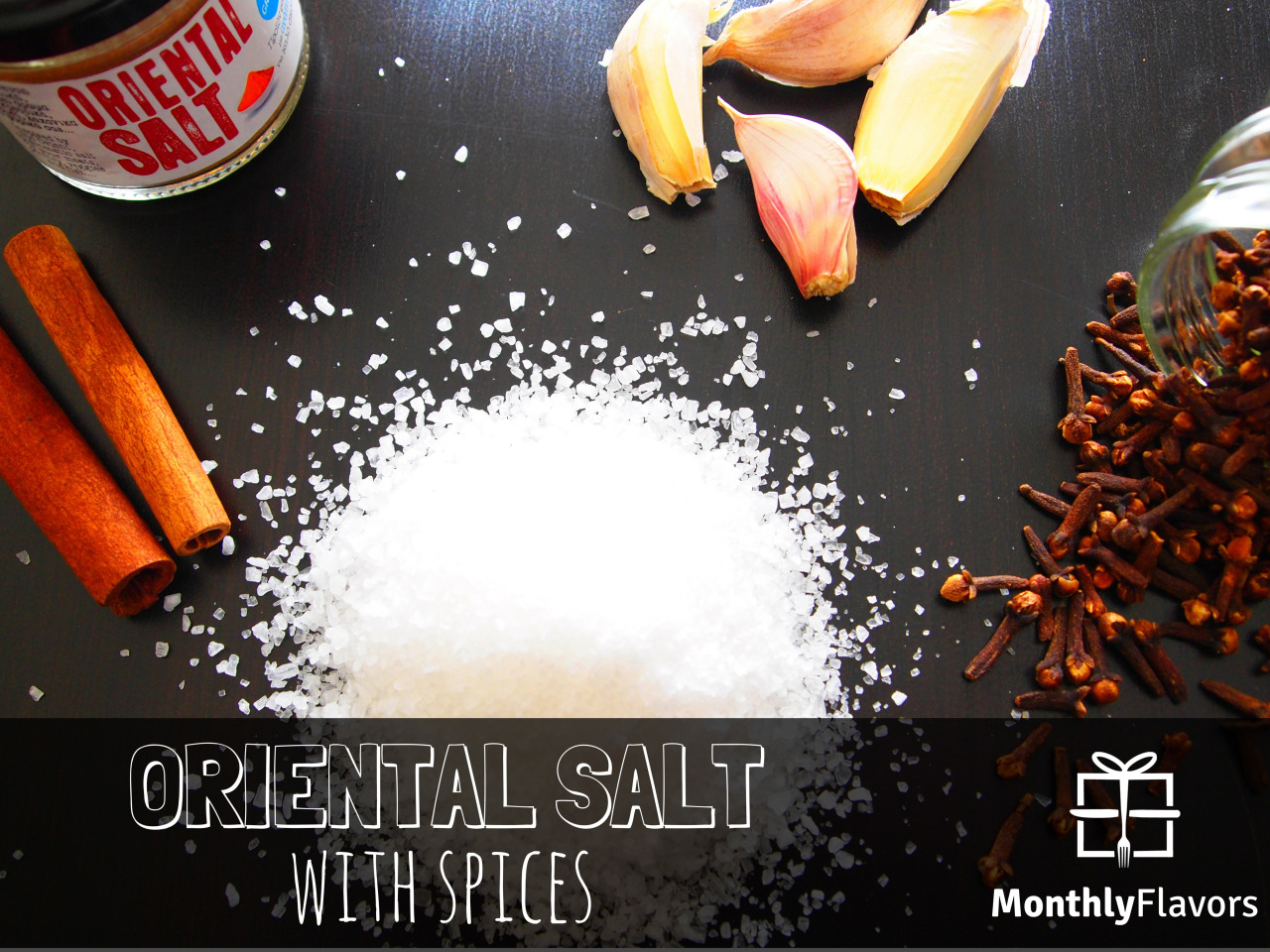 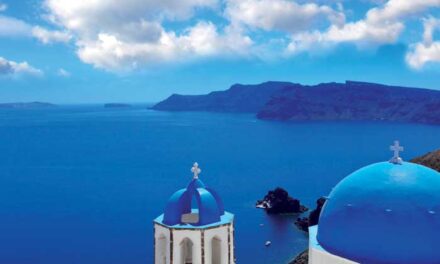 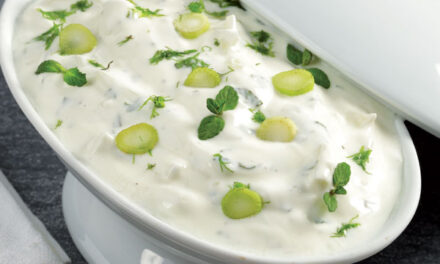